What COVID-19 Can Heal within Us

“Paradoxically, social distancing is renewing our need for social connections.”

As American citizens, we’re unaccustomed to hearing phrases like “mobilizing a nation.” The last time that U.S. citizens mobilized was during World War II. The Roosevelt Administration rationed foods like meat, dairy, coffee, shortening, and oils. Also, it limited consumer purchases, including automobiles, tires, gasoline, fuel oil, coal, nylon, and shoes, so that our Armed Forces could use their raw materials. These were federally mandated and not recommended changes. Some of them, like food rations, ended with the successful conclusion of the war. Others, like desegregating the military and opening the workforce more broadly to women, became the tipping point for permanent, welcomed changes.

The Korean War (June 25, 1950 – July 27, 1953) didn’t demand a collective sacrifice, and the Vietnam War tore our country apart. When terrorists attacked the Twin Towers and Pentagon on 9/11, President Bush unified us with his empathetic call to grieve yet continue to live normally. That would deny terrorists of their coveted victory to curtail our freedoms. 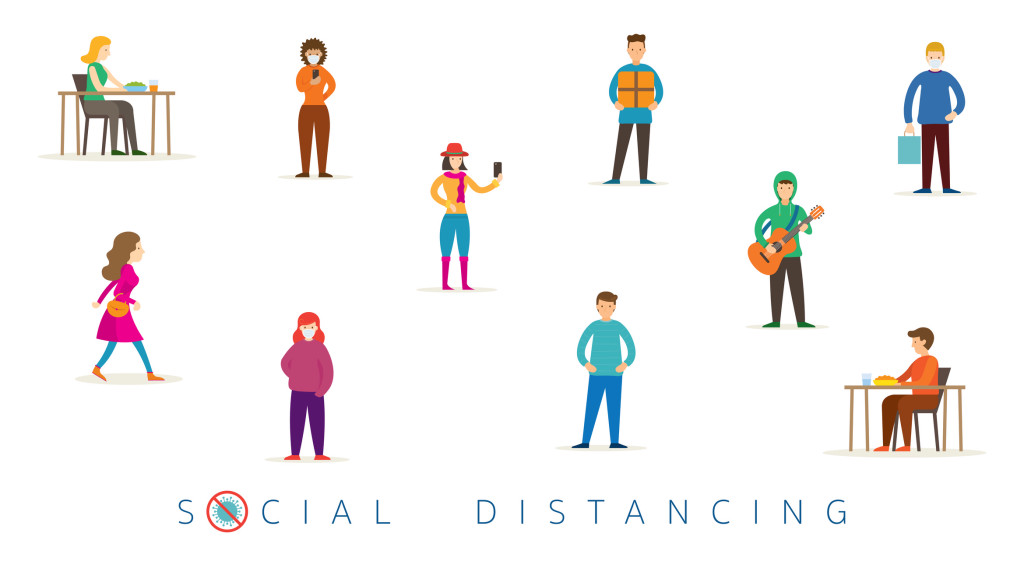 But for the first time in American history, President Bush dismissed the need for self-sacrifice that makes a hoped-for victory in war possible. Shortly after the 9/11 attack, a reporter asked President Bush, “Sir, how much of a sacrifice are ordinary Americans going to have to be expected to make in their daily lives, in their daily routines?” President Bush responded, “Our hope, of course, is that they make no sacrifice whatsoever.” We can appreciate his optimism but critique a lost opportunity to mobilize an entire nation for a multi-front war. As the U.S. Army is volunteer, a tiny fraction of individuals who fought the war, and their families, bore its painful personal costs. Our army shielded most Americans from the sacrifices that fighters and their families would make. Still, we can look back admiringly to the president’s call for national unity and be grateful for his efforts to elicit the best in ourselves.

Paradoxically, social distancing is renewing our need for social connections. COVID-19 gives us a choice to maintain the destructive political discourse that we’ve become accustomed to or regain our understanding of self-sacrifice as the path back to improving the lives of every citizen. Especially since 2004, Democrats and Republicans have equally eroded civility in politics and governing. Hostility across party lines is so bad that it is polluting our relationships. In the not too distant past, religion was a taboo topic when it came to relationships. Today, party affiliation can be the kiss of death for a potential relationship. Drawing on our collective experience of 9/11, and our individual experiences of unsolicited acts of generosity, every citizen can ease up on the pull of self-indulgence and tug harder on the reins of self-sacrifice. We can choose to turn the temporary medical need for social distancing to a permanent imperative for broader social connections.

There is no “silver lining” in the Coronavirus. It is wildly contagious and lethal, and we’re adapting to how to live through it. Illness, death, social isolation, and economic recession – some of these losses are permanent and irretrievable, and others will take years to overcome. If we believe it’s doomsday, we’re likely to reinforce our “Like Hell I’ll help you if you don’t think like me” attitude.

I’m more optimistic that we’ll choose the path of altruism and reciprocal kindness. We see the emergence of a global phenomenon called “caremongering.” Caremongering is the antidote to fearmongering or scaremongering. It means spreading concrete acts of kindness instead of meanness. According to BBC News, “The first ‘caremongering’ group was set up by Mita Hans with the help of Valentina Harper and others. Valentina explained the meaning behind the name. “Scaremongering is a big problem. We wanted to switch that around and get people to connect on a positive level, to connect with each other.” Caremongering can include organizing neighborhood sing-a-longs and concerts from apartment balconies, shopping or preparing meals (following CDC guidelines) for the elderly, leading an online family activity for parents and children, offering necessities like toilet paper and soap to those in need, and sharing acts of kindness to alleviate anxiety and potentially motivate others to act.

We will find ways to mitigate or cure this most recent infection. Social connections will enable us to navigate the pandemic and its social and economic aftermath. But will we be bold enough to let the COVID-19 virus be the catalyst to heal our relationships with others, and address other urgent domestic and global problems that need our attention?