Posted on: November 16th, 2011 by Hayim Herring No Comments 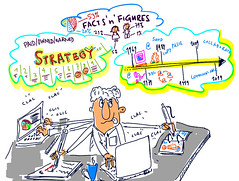 Do you multitask? Come on, be honest!  By multitasking, I mean performing multiple tasks simultaneously, like talking on the phone, responding to e-mails and tidying your desk at the same time. I admit that I multitask, but not as much as I used to. And, it’s my goal to continue to reduce how frequently I multitask.

Good leadership requires intense focus. Naturally, leaders have to deal with multiple opportunities and challenges. But when leaders are so overloaded that they feel like they must respond to e-mails while on the phone, grab a meal or return phone calls while driving, and sleep with their smart phones because they never have enough time, they are living in a perpetual danger zone. Not only is multitasking unhealthy, but multitasking diminishes efficiency.

Apparently, divine angels know about the risks of multitasking. During these past couple of weeks, the Torah readings included the presence of angels. According to Jewish tradition, each angel is assigned to only one task at a time. Their work is so critical that it requires intense focus. Whether or not you believe in angels, in an age where multitasking has become an acceptable more, it’s good to act like one and focus fully on what you’re doing while you are doing it. You’ll be happier with the quality of your work and more productive.