The phrase “Never Again” is generally associated with the Holocaust, the Nazi German state’s planned and executed genocide against the Jewish people. The aim of Nazi Germany in World War II was simple and horrific – eradicating Jews from the human race. That meant obliterating their past history, their then-current existence, and future continuity. The origin of “Never Again” and its connection to the Holocaust is historically unclear. But Cameron Kasky, a junior at Marjory Stoneman Douglas High School in Parkland, Florida, who is Jewish, is credited with adopting #NeverAgainMSD (Marjory Stoneman Douglas) as the hashtag that helped to mobilize student protests for sensible gun reform, which we saw again yesterday. Kasky, and several other student leaders have been relentless in their commitment to change. Their goal is also simple: they want to know that they and other school students in the U.S. can walk into their classrooms without having to fear that they might be the next victims of a mass shooting. 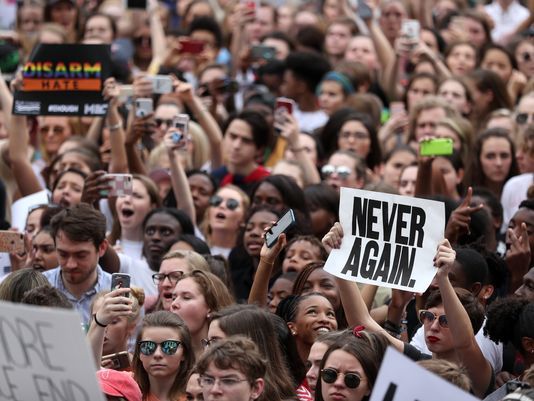 Does it matter that a specific phrase, applied to a certain people, at a certain time, has taken on renewed and reinterpreted meaning? I think that it’s not only a powerful and brilliant adaptation of the phrase but one that none other than Elie Wiesel, the late Nobel Peace Prize winner, who was often associated with this phrase, would approve of. While Elie Wiesel was the chronicler par excellence of the Holocaust and gave personal and collective voice to its Jewish victims unlike any other literary figure of the last Century, he also spoke out against genocide in countries like Sudan and spoke for victims of violence throughout the world. His personal experience compelled him to speak on behalf of those who could not, regardless of their background.

Some may remember the moment when Wiesel’s unshakable belief in the preciousness of all human life made a tangible difference. On April 22, 1993, Elie Wiesel was fittingly invited to be a speaker at the opening of the U.S. Holocaust Memorial Museum in Washington, D.C. He was sharing the stage with President Bill Clinton but had to improvise this most critical speech, because the rain had turned the words of his text into runny ink marks. And, as reported by the Washington Post this is what he said, as he faced the audience, and then turned to President Clinton:

“Forgive me. I’m just back from Sarajevo,” he said, pushing the papers aside. He told the audience about the devastating effects of the Bosnian conflict — the mass killings, the destruction of Muslim sacred sites, the cold-blooded murder of thousands of children. “I cannot put that place out of my mind. It has robbed me of my sleep.” He turned to Bill Clinton, seated on the dais behind him. “Mr. President. You must do something.” It was too much for Wiesel to stand at the opening of the U.S. Holocaust Memorial Museum, that embodied the promise “Never Again,” while the scenes of the mass killings that he had just seen again were haunting him. And those words made a difference. Eventually, President Clinton led the effort to involve NATO in ending the deliberate bombing of innocent civilians during the Kosovo War.

The mass protests of high school students around the country, who have adopted the slogan, neveragainMSD, honor the phrase, “Never Again,” by expanding its meaning in a way that seems consistent with Wiesel’s approach. While it is historically inaccurate to compare gun violence in the US, perpetrated by individuals or groups representing an ideology, to state- sponsored genocide, its use is a legitimate reminder that the preventable loss of innocent lives should do more than alarm us, more than cause us to pray together and hold vigils and protests, but to work collectively to restore the value of human life, and answer our school children’s basic human question: “Can’t we go to school without worrying about being shot?” with a swift, affirmative, “Yes!”

And for those who are cynical about the possibility of reform, it seems fitting to remember the words of another Nobel prize winner, this time in physics, Stephen Hawking’s, who died yesterday. He once said, “Remember to look up at the stars and not down at your feet. Try to make sense of what you see and wonder about what makes the universe exist. Be curious. And however difficult life may seem, there is always something you can do and succeed at.
It matters that you don’t just give up.”

NeveragainMSD, Never Again anywhere, is a reminder to politicians that these students, and many adults, are not giving up this time.