Pew’s Portrait of American Jews and Ritual: A Troubling Landscape

One of Dr. Arnie Eisen’s first big ideas as Chancellor of the Jewish Theological Seminary was “The Mitzvah Initiative.” The most recent Statement of Principles of the Reform Movement encourages individuals to reexamine the role of mitzvah (“sacred obligations”). And, who knows how much Chabad has invested over the decades trying to persuade people to add just “one more mitzvah” to their lives. But the vast majority of American Jews have rejected some core mitzvot/rituals that have defined the Jewish people throughout the ages (like keeping kosher, praying regularly in synagogue and observing a day of Shabbat—to name a few).

The most recent Pew Report reaffirms this reality (see especially chapters 3 and 4 of the report). This isn’t new, but it is a persistent puzzle despite the efforts of every religious stream, and especially the monumental efforts of Chabad. And here’s why we should be concerned about the lack of a wider adoption of consistent ritual practice and what the absence of it might mean for the long-term future of American Jewry. 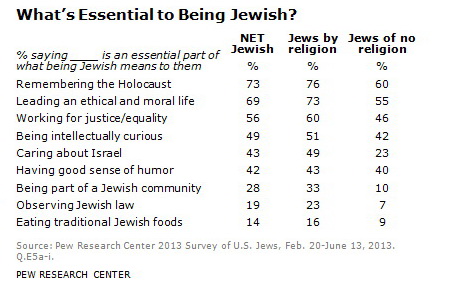 But first, a couple of pre-emptive clarifications. This post is not about whether someone who performs mitzvot is a “better Jew” than someone who doesn’t. That’s a pointless and insulting debate because we’ve all met ritually observant scoundrels and ethical people who don’t care much for core Jewish rituals.

Second—this post is not another call to “adopt a mitzvah” or make “halakha” (Jewish law) relevant. Rather, it’s a challenge that I’m putting forth to those who value ritual to speak more broadly and openly about the nexus between personal ritual practice and ethical behavior, and to help others hear the music underneath the ritual that moves us to do more and be more than we think we’re capable of.

As noted in the Pew Report, the majority of American Jews hold that belief in God, being ethical and moral people and working for social justice are essential attributes of being Jewish—something rightfully to feel quite proud about! So why be concerned about the lack of a greater widespread adoption of a rich, ritual life? Because without it, we risk losing the very values that make us proud of who we are.

So here’s how I understand ritual….Ritual is an imperfect, evolving yet organized system that helps me develop into a more decent human being. With ongoing practice, ritual reminds me to become a more empathetic, thoughtful and generous human being. If I value social justice in my heart, then my ritual reflex must be to pay employees a decent wage and give them a day of rest. If I know that I should be grateful for the many blessings in my life that I didn’t work for, then prayer, with its many expressions of gratitude, helps me remember to express appreciation to others. Ideally, ritual transforms what are often ephemeral moral feelings into immediate ethical actions.

And ritual has other relevance today. We live in a hyper-changing present, saturated with expanding choices that clamor for immediate attention. Personally, Jewish ritual has increasingly felt like the rest notes in a score of music that help me pause, and then regain perspective on which relationships and activities are ultimately important and which only feel so at the moment. And when I’m a part of a community that practices some of the same rituals that I do, I gain the strength that I need to keep practicing, which isn’t always easy.

And that’s what leads me to my concern—for how long will Jews continue to be passionate about social justice, morality and ethics without the reinforcement of ritual? For how long can a set of today’s values be transmitted to future generations without the language of ritual? So far, so good—many American Jews are living exemplary moral lives without the fuel that ritual can provide. But let’s affirm what we know from experience: today’s “givens” can become tomorrow’s “goners” and we know that just because something is, it’s no guarantee that it always will be.

So a call to action to professional and volunteer religious leaders of all stripes: let’s make a stronger case by living example about how ritual and values are inextricably linked. Let’s make the values that underlie our personal religious practice explicit, not in order to guilt or coerce others to behave a certain way, but to stimulate conversation and inspire change. Why? Because we have no examples of sustainable secular or cultural Jewish communities. (Historians, please correct me if I am wrong. But, before you point to yesterday’s Bund or even better, today’s secular Zionism, take a look at how a reclamation project of religious texts, tunes and traditions is occurring among “secular” Israelis today.) And a call to funders: even if you personally don’t like the ritual side of Judaism, understand that it has contributed to your values and priorities, that it has a role to play in perpetuating them and that initiatives that foster practice and appreciation of ritual are worthy of your support.